Georgian Longcase Clock by J W Clarke, Circa 1770
England
Circa 1770 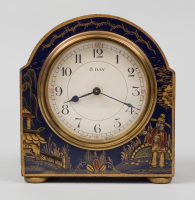 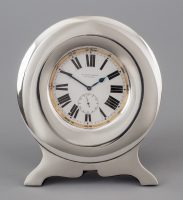 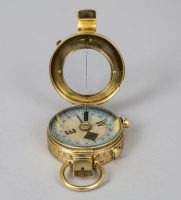 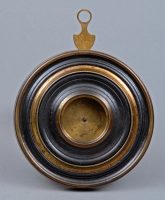 Georgian Watch or Clock Holder, Circa 1770
English
Circa 1780

Bronze Desk Thermometer, Circa 1828
English
Circa 1828 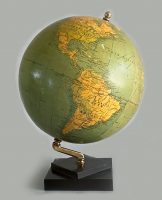 There is nothing more elegant than a longcase clock standing against the wall in your entry way to welcome your guests.  In our digital world of technology, it certainly is unanticipated to see a beautifully crafted antique longcase clock still working with accuracy after 250 to 300 years. What other device or mechanism has the longevity and accuracy of this beautiful piece of antique furniture? The clock regulates our lives, tells us when to rise, when to eat, when to work, when to rest and when to sleep.

Tempus Fugit is Latin meaning time flies. Very often you will see these Latin words on the dials of antique longcase clocks. The length of the case probably developed to protect the pendulum and the weights, which hung below the movement which was housed within the hood. Longcase clocks include the 30-hour, intended for daily winding, and eight-day movements. The 30-hour clock was made by country craftsman, whereas the eight-day clock was a more sophisticated mechanism preferred by London makers and would usually strike on the hour.

In the ancient world, sundials were the first to measure the movement of the sun. Its shortcoming was nighttime. In the 16th century that was solved with Nocturnals, a star clock, which was an instrument that would tell time by basically reading the stars. The oil clock and sand glass clock were used in the 17th and 18th century. The oil clock not only measured time by the burning oil levels falling in the glass, but also gave light.

The earliest known longcase clock is by Ahasuerus Fromanteel, 1659-60. There is a long history of mechanical clocks that are driven by weights, trains of wheels and pinions and regulated by different types of escapement. In England in the late 18th and 19th centuries, provincial clockmakers, especially in the Lancashire and Yorkshire areas, worked to supply the London clock trade with their engineering skills and aesthetic capabilities and never received recognition. Amazingly enough, despite the ingenious and complicated mechanisms, the vast majority of longcase clocks were simple and straightforward devices.

The English antique longcase clock is a unique combination of the skillful feat of engineering and expert cabinet craftsmanship.  The interior design world is more interested in the clock as a piece of furniture rather than as a complex mechanism. I find both fascinating, although I must confess that the casework is my first attraction. There is a huge selection of different types of clocks to choose from. Besides tall or longcase clocks; there are wall clocks, table clocks, carriage clocks, mantel clocks, regulators, bracket clocks, astronomical clocks, grandmother clocks, skeleton clocks, painted dials, brass dials.

The cases were also made with a variety of decorative woods: oak, mahogany, walnut, satinwood, rosewood, pine, and kingwood. There are also different types of magnificent case work such as inlays like marquetry and parquetry, floral marquetry, arabesque marquetry, oyster veneers. Brass inlay and stringing were popular.

Lacquered or japanned clocks are another category of decorative interest. These are quite beautiful. Japanning was the European version of the time consuming decoration that imitated Chinese lacquer work in the 1700s. These clocks would be covered with chinoiserie designs like pagodas, palace scenes, boats, water, trees and rockery. There is an antique clock out there for every taste.

When one thinks of an antique barometer, one probably thinks of the wheel or banjo style barometer, which was invented in 1663 by Robert Hooke(1635-1703). The barometer measures the atmospheric pressure of weather and elements of the weather. Although the mercury barometer was invented by Evangelista Torricelli in 1643, Robert Boyle (1627-1691), British scientist and philosopher, is credited with relating changes in the height of the mercury to changes in the weather.

Around 1810 the wheel barometer became the first practical and commercial barometer to become popular among farmers and the wealthy. It consists of a dial, thermometer and spirit level in a banjo-shaped decorative case.

A mercury barometer has a glass tube that is closed at the top and open at the bottom. At the bottom of the tube is a pool of mercury. The mercury sits in a circular, shallow dish surrounding the tube. The mercury in the tube will adjust itself to match the atmospheric pressure above the dish. As the pressure increases, it forces the mercury up the tube. The tube is marked with a series of measurements that track the number of atmospheres or bars. Observers can tell what the air pressure is by looking at where the mercury stops in the barometer.*

Another type of barometer is the stick barometer which became popular between 1815 and 1830 and is attributed to Daniel Quare (1649-1724). It consists of a long glass tube of mercury that sits in a cistern of  mercury and is sealed. They were usually made of mahogany with boxwood or satinwood inlays. Other types of barometers are the angle barometer, the aneroid barometer, the “Admiral Fitzroy” barometer.

In France around 1780 the wheel barometer became popular along with the very decorative Louis XVI style. This barometer is usually painted or ornately carved and gilded in an oval or octagonal shape.

Antique globes look so interesting in a library. You immediately create a point of interest in a room and a conversation starter.

Antique globes have been around for at least a thousand years. The first known globe, a revolving sphere, was made by Crates of Mallus, Greek language grammarian and Stoic philosopher, circa 2nd century B.C. In the 2nd century A.D., Claudius Ptolemaeus (or Ptolemy) used spherical coordinates (i.e. the longitude and latitude) to fix a position on the globe.

Martin Behaim of Nuremburg was the first European to make a terrestrial globe in 1492. Interesting that that’s the year Columbus discovered America. He thought he had discovered the East Indies.  But because there was a blank spot or gap in Behaim’s globe, he had discovered the continent of North and South America.  All globes use these coordinates.

Most antique globes are made of a papier-mache shell and covered with twelve hand-colored strips called “gores” and surrounded by a brass meridian ring, a horizon ring and then mounted in a stand.

Originally globes were made in pairs: one a terrestrial and one a celestial globe. Other types of globes are table or desk globes and pocket globes.