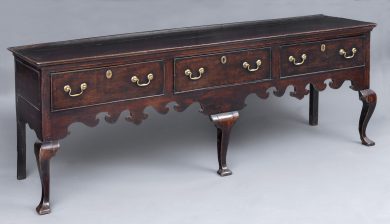 This antique oak dresser is made with traditional lines. It features a Gothic-shaped apron on the front and sides. There are three cockbeaded drawers. Three squared cabriole front legs with squared pad feet and two straight back legs. Original brass swan neck handles and escutcheons.  The top back features the original dish rail.

Originally these dressers were used to show off the owners richest plates and utensils.  They figured prominently in the halls of royalty. This dresser  is mounted on five legs which replaces the need for stretchers.  The back legs should always be flat posts and never exceed two in number, as they are on this example. The piece would not be considered to be in it’s original condition if the back legs were changed.

This oak style was replaced by walnut and mahogany in fashionable homes later on.  Craftsmen, adopted the cabriole leg and continued its use after it had ceased to be fashionable in London.