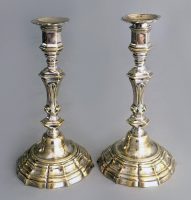 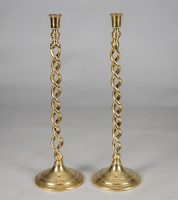 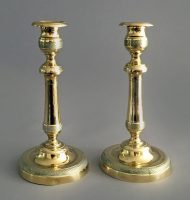 Pair of Brass Candlesticks, Circa 1840
England
Circa 1840 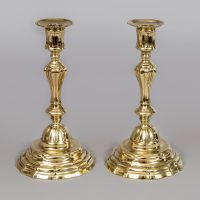 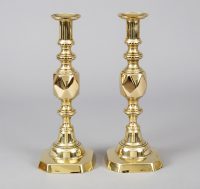 Antique Pair Brass "The King of Diamonds" Candlesticks
English
Circa 1860 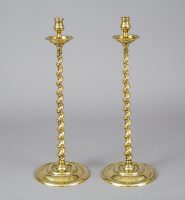 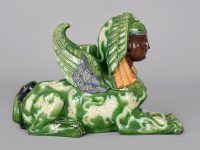 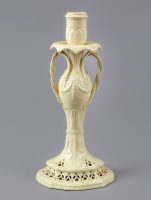 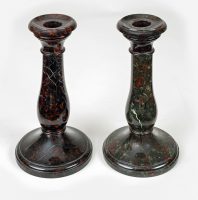 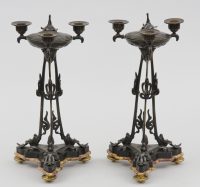 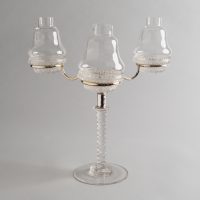 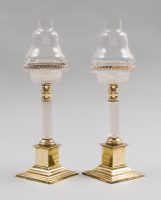 Pair of Antique Glass and Brass "Cricklites"
England
Circa 1890 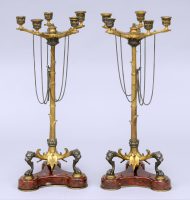 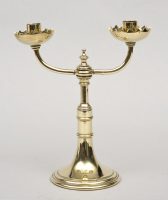 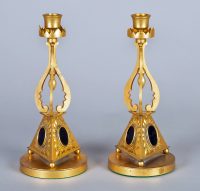 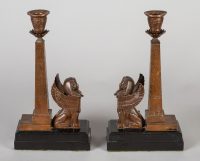 The candle was the most widely used form of lighting until the middle of the 19th century.  Although electricity surpassed the usefulness of candle power, they are still used today for decorative effect and to create an ambiance of warmth and set the mood for entertaining.

Antique candle holders were made of a variety of materials; wood, iron, pewter, tin, porcelain, pottery, brass, silver or glass. An early form of candle holder was the pricket stick onto which a candle would be pressed down onto a spike. Pricket candlesticks were made until the 14th century when a socket was devised so the candle could be inserted. In the 1600’s, silver and silver plate were predominately used. Silver candlesticks were made in several styles in different time periods: Baroque, Queen Anne, Rococo and Neoclassical. Because silversmiths used thin sheet silver to manufacture candlesticks in the mid to late 1700s, the base of the candlestick would be weighted with wood or plaster of Paris to give it stability. Hence they would be less expensive since they contained less silver.

Candlesticks really became much more popular in the 18th century when fine dining became an art form. The gentry entertained and ate later in the evening, so there was a high demand for more candle power and thus highly decorative candlesticks. The dining table would be laden with pairs of ornamental candlesticks and candelabra, which would give off a warm glow and certainly would impress the guests.

Chamber sticks were used in the bed chamber and featured a large saucer-like base to catch the dripping wax, a short stem with a handle so they could be carried up the stairs and light the way to the room. Some had snuffer scissors attached in order to trim the wicks.

Antique candelabra are just a candlestick with multiple arms emanating from a central shaft.  The styles were similar to candlesticks and were made in pairs. The candelabra originated in Rome and Etruria. They have been excavated at the ruins of Pompeii and were usually made of bronze. They were quite tall and were probably used as architectural elements. Today, most often they are used as the show pieces of the dining table, either singly or in pairs. candelabra/https://susansilverantiques.com/product/pair-renaissance-revival-candelabra/.    In the later part of the 19th century it would not have been unusual for candelabra to have 12 to 14 arms or lights.

Since antique candlesticks and candelabra are a great decorating motif, they are highly sought after and not difficult to find. Patina is very important. Antique brass candlesticks should have a soft and mellow color, not bright and brassy. Candlesticks were generally made in pairs and that is how they are sold today. A single candlestick is usually valued at only a quarter of the pair.