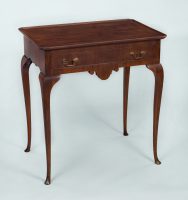 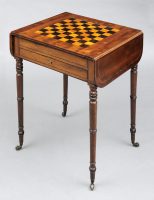 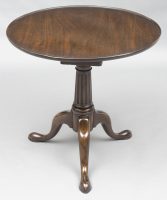 An elegant games table in your library or living room makes a statement and a conversation opener. Antique games tables come in different styles, forms and sizes.  Card playing in the 18th century became incredibly popular and the cabinet makers were ever so eager to support the fashion. Chippendale, Sheraton and Hepplewhite contributed their designs from their design books. Sheraton and Hepplewhite designs are lighter in feeling than the Chippendale style.

Early card tables were made of mahogany, had fold-over tops that were hinged, had oval dished wells for money, dished corners for candlesticks and the surface was covered in a baize playing surface which is a typically green woolen material resembling felt. It also had a gate or swing leg that would support the top when opened.

The best card tables had a concertina action, so when the hinged top opens, the legs extend out, are symmetrical and lock in place. Antique concertina-action tables have obvious advantages over the gate-leg style of table; there is always a leg at each corner whether the table is folded or extended. The gate leg table is uncomfortable to sit at, much less to sit at for any length of time playing chess or backgammon.

Games tables were made for specific games: cards, draughts or checkers, backgammon and chess. Some had reversible tops for different games. Some expanded for more players. Some had intricately inlaid tops, ornately carved or turned legs, swivel tops or flaps to accommodate more room for games pieces.

The fold-over card or tea table was not introduced until the end of the 17th century.  At this time card playing and gaming became a mania with huge sums of money at stake.  This popularity of gaming created a wide demand for purpose made card tables. Throughout the 18th century tables with fold-over tops were made in pairs; one with polished top to act as a tea table, the other with the surface rebated to take a panel of needlework or a plain baize for gaming and might have been fitted with candlestick or counter wells. They were made in a plethora of designs and became more elaborate as time went on.  Besides being made in many different woods, some were painted or japanned.

Chinese lacquered furniture was extremely popular at time but it was very expensive and scarce.  This demand led to the development of European “japanning” which was introduced  in the mid-17th century in imitation of Oriental lacquer.  Until early in the 18th century the output of fine English japanned work was limited to cabinet makers and decorators. In 1688, John Stalker and George Parker wrote a book on japanning called “Treatise of Japanning and Varnishing.”  This book was geared toward the amateur rather than the craftsman.  They detailed in an easy manner instructions of varnishes to use, woods that were best suited, preparation of the whiting and parchment, layers, colors for groundwork, instruments to use, metal dusts, designs, etc. Amateur japanning became extremely popular for young ladies in early Georgian times and continued for quite some time. These pieces have become highly sought after today.