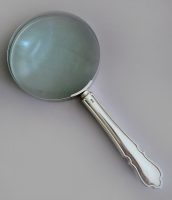 Most magnifying glasses are double-convex lenses that are used to produce a magnified image of an object. This is accomplished by placing the lens close to the object to be viewed. In this way the light rays are bent toward the center of the lens. When these bent rays reach the eye they make the object appear much larger than it actually is. The magnifying glass is usually mounted in a frame with a handle.

The ancient Egyptians used chips of crystal or obsidian, a type of stone, to view small objects. The Roman Emperor Nero was known to peer through gemstones to see actors on stage.

Some of the first optical tools besides the magnifying glass were spectacles and microscopes. Roger Bacon, (1220-1292), the English philosopher, described properties of a magnifying glass in 1267. Salvino D’Armato degli Armati of Florence is credited with inventing eyeglasses in around 1285, though various sources suggest an earlier origin. He shared the invention of his new device with Allesandro della Spina, an Italian monk, who made it public and is often credited with inventing eyeglasses.

By the sixteenth century, the idea of holding a lens a certain distance from the eye in order to produce a magnified image was well developed and began to manifest itself in optical instruments, such as the microscope.

A magnifying glass can also be used to focus light or sunlight, to create a hot spot at the focus and ignite a piece of paper. When the lens is held at exactly two focal lengths from the paper, all of the light will be concentrated into a tiny point, generating enough heat to start a fire.

The magnifying glass has remained a constant throughout the history of optical instruments. It is not an antiquated instrument but has remained in use for hundreds of years…