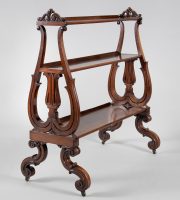 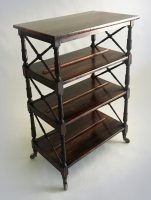 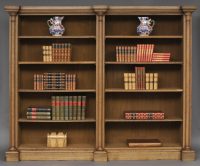 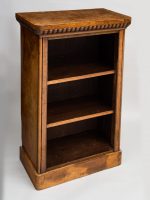 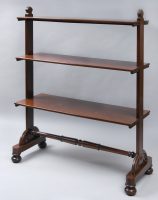 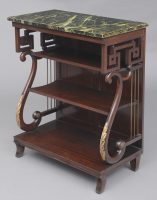 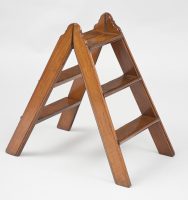 Georgian Ash and Iron Hinged Folding Ladder, Circa 1830
England
Circa 1830

Antique bookcases and étagères are just another form of storage.

Either one can be used in any room in the house. The library is the primary place for an antique bookcase, but they are so practical in the living room for not only books but interspersed between your decorative ceramics, photo frames, travel mementos or curiosities.  They look so very elegant when you flank a pair of them on either side of your fireplace. They give the room a warmth and ambiance and seem to say “come and relax by the fire with a good book”.  They’re always needed in the home office to keep your files and papers in good order. The dining room is another place for an antique secretaire bookcase to store your porcelain plates and serving pieces, such as tureens and covered vegetable dishes.

Bookcases came into prominence in the 18th and 19th centuries when books became more accessible.  Before that only the wealthiest people possessed books.  Bookcases and display cabinets were essentially the same since they can both be used for books or porcelain objects. Many bookcases and cabinets before circa 1775 were quite large because they were intended for libraries of large impressive houses with high ceilings. During the late 1700s and early 1800s, smaller items for the library were designed, such as open bookcases, chiffoniers, library steps, book carriers and revolving bookcases. I prefer the open bookcase to the glazed bookcase because they have a more welcoming, friendly and warmer appeal. Leather bound books in an open bookcase also have an inviting atmosphere.

Bookcases:  They evolved from the simple shelf. They are beautiful pieces of furniture and are extremely well crafted. In the 17th century, the wealthy nobility built large formal bookcases which would have been of enormous proportions, made in several sections and might have been built into the wall.  The sections would be a breakfront glazed cabinet, a fall front or secretary desk with drawers, cubbyholes and secret compartments and usually built on a plinth base. By the 18th century it evolved into a smaller version with the same elements that combined drawers, a writing area with glazed space above to store books but be free standing and have bracket or splayed feet. Both Chippendale and Sheraton had many designs for bookcases in their design books.

Étagères: The antique étagère is another form of bookcase but smaller and more delicate. Its origins are French and consist of hanging or standing open shelves. They are usually open all around and can be used for books or small collections, antique vases, decorative jars with sterling tops, picture frames – just about anything decorative. They can be made from wood, brass, rattan and bamboo or in any combination thereof. The whatnot is the English form of the étagère and is made from mahogany, rosewood, satinwood, walnut or a fine specimen wood. Even though the form originated in the Georgian period, it became very popular in the Victorian era when excess collecting became fashionable.

Ladders: At one point everyone needs to climb to a high place to retrieve a book or an object of some kind. It is said that the ladder has been around for 10,000 years. Pictures of them were found on the walls in a cave in Valencia, Spain, called the Cuevas de la Arana (known in English as Arana Caves or Spider Caves). Ladders can probably be traced further back than that. There are rigid and flexible ladders. The flexible ladder is made from rope or grass and is easy to carry but not so easy to use. Rigid ladders are more secure and safer to use. There are coaching ladders, pole ladders, folding ladders, step ladders or rolling library ladders, metamorphic ladders. All furniture ladders are portable.

Susan Silver Antiques has several types of antique ladders. The most unusual one is the library pole ladder which when closed looks like a pole but when opened unfolds to form a ladder.  Because it takes up so little room, it can be put in a corner, be out of the way and out of sight.