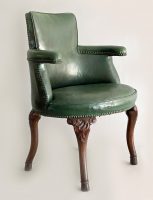 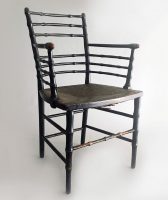 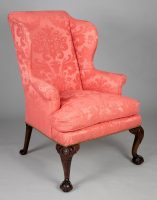 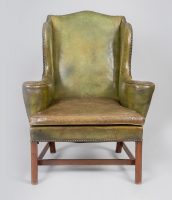 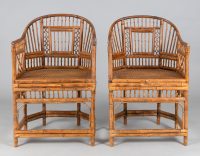 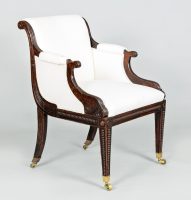 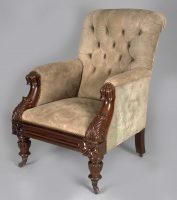 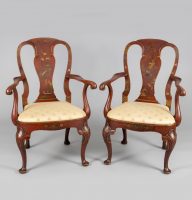 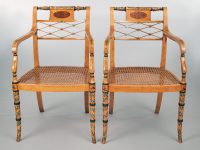 French Napoleon III Arched Back Armchairs, A Pair
France
Circa 1870 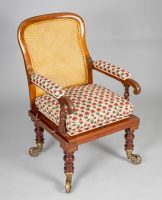 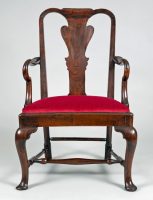 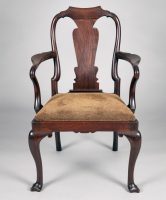 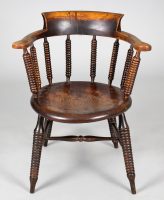 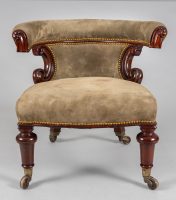 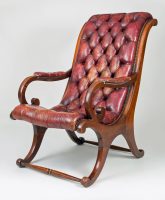 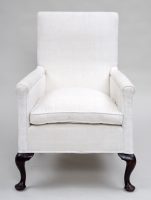 Upholstered High-Backed Armchair, Circa 1860
English
Circa 1860 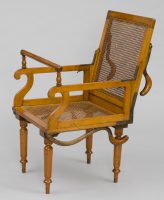 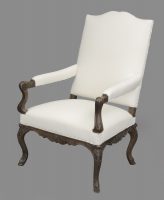 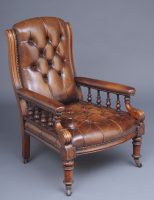 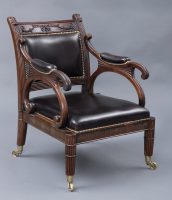 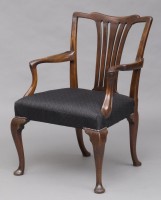 Chippendale Style English Antique Armchair in the Gothic Taste, Circa 1870
English
Circa 1870 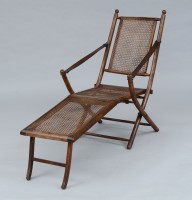 Sitting in a chair is a very personal thing. Not everyone will be comfortable in the same chair. An antique armchair tends to be more comfortable than a side chair because it is more supportive. Here at Susan Silver Antiques we always suggest you sit in a chair before you buy it to see how it supports your body. There are so many types of armchairs.

The Wing Chair: The antique wing chair was created to shield the sitter from drafts and to hide his identity. They were made from the 17th century to the present day. Early wing chairs were made from walnut and had high slanted backs flanked by angled panels or high wings, closed scrolled arms and stretchers. The stretchers made the chair very sturdy. In fact, that is why any antique chair with stretchers has lasted to the present day. The more refined wing chair was developed in the mid-18th century, would be made of mahogany, have a crested or serpentine shaped back with either outwardly scrolled arms or downwardly sloping arms and of course, be upholstered in a needlework covering or silk brocade. They are so elegant when positioned in a library, or in pairs in the living room.

The Club Chair: To me the most comfortable antique English armchair is the classic library club chair. Named for the chairs used in the 19th century at gentlemen’s private clubs in England where they could quietly read a book or a newspaper in a well-worn leather chair without being disturbed and have a cognac sitting on a table beside them. The antique club chair has a rounded shape with a low buttoned back, is deep seated, is fully upholstered and is lower than a standard chair so you can extend your legs or use an ottoman or low stool to keep your legs elevated. They can be upholstered in fabric or leather.

The Library Arm Chair: A variation of the club chair is the library armchair.  It is usually upholstered in leather but has a mahogany, rosewood or walnut frame. It also is low scaled. They are comfortable but they don’t have that sink down into feeling of the club chair. They are more formal and come in a variety of shapes.  Some have caned backs and seats and have leather cushions, the arms are padded for comfort, the legs will be turned and carved and terminate in casters. The casters make the chair more mobile.

The Dining Chair: Usually the chair at the head of the table would be an arm chair and the side chairs would match the master arm chair. Antique dining chairs were made in sets of as many as thirty-six. Most of those sets have been split into smaller sets of eight to ten to twelve chairs each. Some sets were made with arms and some not. Before the 17th century, only very important people sat in a chair with a back and arms. In France, Louis XV led in the design of arm chairs and the English followed suit.

Dining chairs didn’t become fashionable until the 17th century when they also became more comfortable. Chairs of this period were made of walnut or beech with caned seats and caned and paneled backs. They were heavily carved with turned supports and might also have been upholstered.

In the 18th century dining chairs became simpler and were made of walnut, oak or elm with back splats, had drop-in seats, deep seat rails and cabriole legs with stretchers. Also in this time period, the chair maker gave great attention to the splat, which became more highly carved with shell designs, ribbons, C-scrolls and the knees were carved as well. The Rococo influence of curved lines was quite strong in the 1730’s. In the 1750s the Neo-classical movement followed with designs by Robert Adam (1728-1792), and Thomas Chippendale (1718–1779). Interest in the movement was stimulated by archeological discoveries in Italy and Greece. Designs were more delicate, legs became straighter and splats were pierced with swags of laurel.

Hepplewhite and Sheraton styles were very popular in the 1780s and 90s. The Hepplewhite shield-shaped back dining chairs had interlaced oval and heart shapes, tapering legs and spade feet. His chair styles were featured in his design book The Cabinet-Maker and Upholsterer’s Guide (1788-1794). Thomas Sheraton also published a design book The Cabinet-Maker and Upholsterers Drawing Book (1791-1802) Most of Sheraton’s backs were square with pierced splats in the form of an urn with carved drapery.