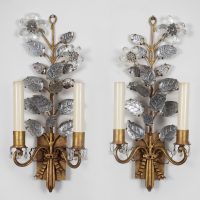 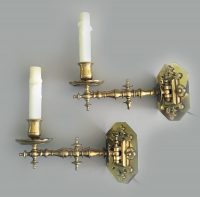 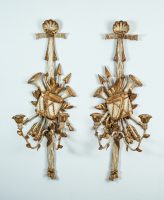 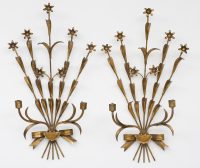 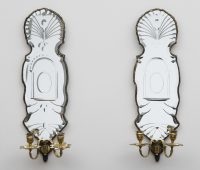 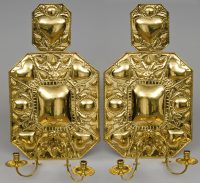 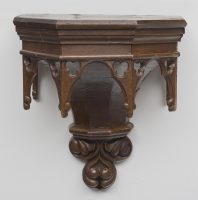 Antique sconces are lighting devises that are attached to the wall. They first appeared in classical antiquity and then were found mainly in Gothic churches and royal castles during the Middle Ages. But the form took a major leap in design in the 17th century and might include mirrors or a metal reflective back to intensify the light. Their design would echo the style of the room, whether it is Rococo, Gothic, Georgian, Regency, French, Neoclassical, etc. In the 17th century they were made of silver or brass. In the 18th century craftsmen used porcelain or bronze ormolu. Today they are used in pairs in hallways, on either side of a entrance door or window, in the bedroom on either side of the bed, in the bathroom flanking the mirror, in the dining room or living room on either side of an antique gilded mirror or even a piece of fine art. The fireplace is another great area to use wall sconces.

Some brass wall brackets had arms that were designed to swing so the lamp could be moved in a 180-degree horizontal arc. Cast iron kerosene lamp wall brackets from the period are usually mounted at eye level so they can cast a warm glow and diffuse the light. They very often can seem to make the room look larger.

Brackets were usually brass or cast iron and held kerosene fixtures in place. Another definition of bracket is a wooden carved element that is placed on the wall to hold collections or curiosities, such as Chinese porcelain vases or Delft ware. The most beautiful ones are boldly carved and gilded.