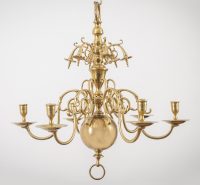 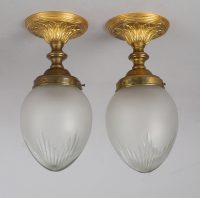 Antique elaborate crystal chandeliers can be stunning show stoppers at the entrance to your home and very often are a symbol of social status and wealth.

Basically a chandelier hangs from the ceiling and is composed of a central column from which emanate arms fitted with candle cups and saucer like dishes to catch the wax. The first chandeliers were quite simple. They were just two pieces of wood forming a cross with spikes or prickets at the four ends to which animal fat candles were thrust onto. They were used by the church at the end of the 9th century and later other types of chandeliers found their way to castles and then working class homes in the 16th and 17th centuries.  In the 1600’s Dutch and Flemish brass chandeliers with a central ball stem consisting of a large brass sphere and tiers of upward curving arms were made and still are used today. Brass was used because it was smooth and highly reflective.

Rock crystal made its appearance in the 17th century. A typical chandelier at this time consisted of an open “birdcage” frame of bronze with a vase like shape and decorated with elaborate rock crystal drops. This type of chandelier is at Versailles in France. By the 18th century, Venetian glass chandeliers were being made on the island of Murano. During this time period lead crystal techniques were developed and could be manufactured rather inexpensively and they became a very popular decorating feature in the grand houses of Britain. Some chandeliers were eight feet wide and as much as fifteen feet tall. The Venetian chandeliers could be very extravagant and were decorated with profusions of flowers, fruit and leaves and often in vibrant colors.

Baroque and Rococo designs came to the fore and included lots of swirls, garlands of flower and cupids. Also during this time Russian craftsman in St. Petersburg interpreted the French styles and often included colored glass, especially royal blue drops. But it was probably in 18th century France and England that crystal chandeliers blossomed with the Neoclassical style. This was the height of exuberant, luxurious and magnificent designs. Some of the manufacturers were Osler and Baccarat in England. The Neoclassical architect Robert Adam (1728-1792) and his two sons, Robert and James, had numerous chandelier designs in their design book Works in Architecture (1773). His designs were very refined and elegant.

With the advent of electricity, the sky’s the limit on style revivals – Gothic, Baroque, Rococo, Neoclassical, Roman and Renaissance.

Chandeliers have stood the test of time and they are still popular today. They make a beautiful statement in a room.  They are elegant and give an aura of formal stateliness. There is huge range of styles to choose from.

At Susan Silver Antiques we have several chandeliers for you to see. Browse around or call for more info.