Press About Susan Silver in the Berkshires

Massachusetts Berkshires are blessed with a landscape not unlike that of England’s Cotswolds. A country of rolling hills, patched with tilled fields and pastures and crisscrossed by stone walls. These tempt travelers to linger and visitors to stay.  Add to that, the two-and-a half hour driving from either New York City or Boston. Therefore, you have a nearly irresistible weekend destination – as Arthur Dunnam, design director of Jed Johnson Associates, can attest.

Additionally, good friends living on the edges of the Berkshires makes Dunnam is a frequent visitor. Prowling through the region’s remarkably eclectic collection of antiques and decorative dealers is so enjoyable. “The unexpected thing about shopping in the Berkshires is that the range of objects is so diverse.” He continues, “It’s not just folk art or American antiques.”

For instance, start on Route 7, south of Great Barrington, just outside the village of Sheffield. Dunham says this is where you’ll find Susan Silver Antiques in the Berkshires, she carries “unexpected things in high style.” What is more, this charming clapboard house is “literally packed to the rafters”, with 18th and 19th century furniture, objects and light fixtures. Finds include giltwood Regency bull’s-eye mirrors, Imari jars (They’d make beautiful lamps,” he says).  French botanical and bird prints, chairs, chests and armoires. “I’ve bought some wonderful chinoiserie lacquered tables here, and beautiful porcelain lamps,” says the designer.

Excerpt from Architectural Digest Spotlight on Hudson Valley Homes Featuring Susan Silver in the Berkshires as a favorite source for designer Bruce Shostak.

Comparing architecture to dance, the Federal Style house known as Hillstead, in the Hudson Valley town of Claverack, New York, would be a quadrille. Crisp, elegant, and symmetrical. Certainly Hillstead’s quirky period details—from the flamboyant classical motifs carved into the living room mantel to the built-in benches on the front porch—captivated Bruce Shostak and Craig Fitt when they toured the circa-1817 property with a real-estate agent 15 years ago.

Our aim was to purchase the painted-brick dwelling as a country escape, but the family that had owned it since the 1930s fretted that the landmark would be in danger of rude modernizations once the nearly two-acre property changed hands. Beforehand, a number of potential buyers had made generous offers—all were rejected. Shostak, an interior designer, and Fitt, an aesthete who works in investment banking, finally won out, convincing the sellers that they would be conscientious stewards.

Former lifestyle-book editor Shostak, who founded his eponymous decorating firm in 2004, says the goal was always “to do justice to the house and furnish it appropriately but not slavishly—what I like to call period-ish.”

In conclusion, “If we were to do it all over again,” Fitt concedes, “I’d want a smaller place on a larger piece of property. Right when we opened the front door it felt like home here.  To my eye it is the most sublime even though it’s not the most important Federal house around here.”

SUSAN SILVER ANTIQUES in the Berkshires: A SURVIVOR OF THE MID-CENTURY STORM

Reason suggests that the antiques business should be immune to the vicissitudes of time; but, in fact, the furnishings of the past are just as susceptible to the whims of fashion as any other aesthetic choice. Twenty-seven years ago, in 1982, when Susan Silver, of the eponymous antiques shop in Sheffield, MA, first entered the business, ancestor worship was in full swing. Decorators such as Mark Hampton and Mario Buatta redid Park Avenue apartments and grand houses all over the United States as if they were ducal estates in Yorkshire. Silver felt, at the time, quite correctly, that by specializing in 18th-and-19th-century formal English furniture, she couldn’t miss. Though she specializes in library furniture, and pedestal desks fall neatly within that category, Silver finds them “too lawyerly.” Tables, such as this English Regency library table with black leather writing surface and reeded legs are more versatile.

A Seismic Shift in the Market

Besides, what could she do? She loves the stuff. Now in the last 5 or 6 years, a seismic shift began to gather force. Younger collectors were turning their backs on fine furniture as if it were no more alluring than grandma’s Grand Rapids cast-offs. Serious furniture collectors were in the thrall of Mid-Century Modern. “I actually considered, at one point, going that way myself,” Silver jokes.

“Then the prices got insane,” she adds, unable to suppress a hint of glee. “They were charging a fortune for some plastic thing that was never intended to withstand decades of use. Plastic furniture was all experimental: nobody knew how those plastics would age, what the chrome would look like in 50 years, how long the glue would hold the molded plywood together. Designers and manufacturers of most of that furniture did not know or care. Also, they assumed that, once it started falling apart, people would toss it out and buy something else.”
Fortunately, some furniture really is forever. About a year ago, the pendulum began to swing back her way, Silver stood ready with her tried-and-true investment-worthy stuff. Finally, in 2008, Susan Silver Antiques was having one of its best year’s ever, until October when the economy fell apart.
Shifting taste wasn’t the only contributing factor in the turnaround. “Five years ago, the designer trade started to trail off,” she says, referring to the professionals who would make routine pilgrimages to Sheffield in the Berkshires to visit the wide range of quality dealers there. “Now they discovered that it was easier, and they had infinitely more choice, if they shopped for antiques on-line.”
Going to extremes: We asked Susan Silver to point out some superlative pieces.

Chinese funerary porcelains, intended to keep the deceased comfortable in the afterlife. They date from the Ming Dynasty (1368-1644). Regency drop-leaf sofa table with extra leaves, that pulls apart to reveal a backgammon board within. $36,000.

Most Difficult to Clean Metal polish imported from Germany. “It polishes silver, brass, tin, copper, but it doesn’t make the brasses, or any of the other metals, too brassy. It leaves a mellow patina, and the cracks turn black instead of white.” $35.
End of article 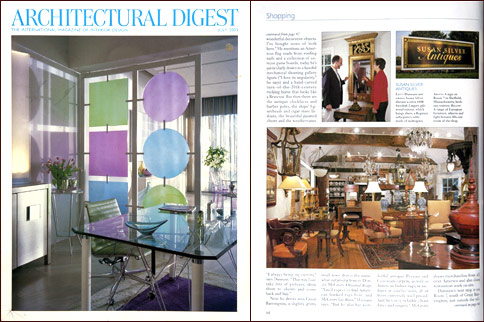 Japan’s long, rich history of fine and decorative art dates back thousands of years. Japanese art and antiques that have survived from centuries past include samurai swords, scrolls, prints, painting, netsuke figures, and earthenware vases. Today, these items are prized for their historical significance and unique aesthetic. Prices for Japanese art and artifacts are driven by a niche but loyal market. Collectors choose pieces for their cultural relevance, evidenced by the inclusion of Japanese works in most major museums. Recent years are seeing the popularity of contemporary Japanese cultural trends like anime. Generating a more widespread audience for the country’s rich art history and a competitive market for contemporary Japanese artists.

Like any investment, buying art involves some degree of risk. One smart strategy to mitigate this risk is to buy the highest quality objects available. Buyers and collectors seeking out the best examples of any given object will always be in any market. Thus, iconic objects in perfect (or near perfect) will be more likely to retain, and possibly increase in value over time. Request a condition report or any other existing documentation prior to purchase.