George II Mahogany Chest on Chest, Circa 1740
England
Circa 1740 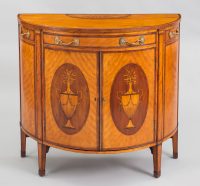 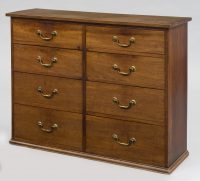 Technically speaking, a “case piece” is a piece of furniture used for storage. Who doesn’t need a piece of furniture to put things away?  It doesn’t matter whether you live in a small apartment in a big city, a loft in an old repurposed factory building, a house in the country or home on a huge rambling estate; everyone needs storage space. It’s something you never have enough of.

These pieces include chests of drawers, cabinets, cupboards, consoles, commodes, credenzas, linen presses, armoires, trunks, bookcases, secretaires or secretaries, desks, sideboards – just about anything with drawers, doors , shelves or a combination there of. They can be used in any room where storage is needed.  A chest of drawers can go not just in a bedroom, but in a living room, an entrance foyer, a bathroom, at the top of a staircase, the basement- anywhere. An antique Chippendale formal mahogany chest of drawers looks quite impressive in an entry way. An antique tall pine secretaire bookcase or secretary can look very elegant in a kitchen.

English antique case piece furniture is very well made by craftsmen who have spent years learning their trade, honing their skills and would have had to join a furniture craft guild where very high quality standards would have to be met. They often would have to apprentice to a master craftsman for eight to eleven years before being invited to join a guild. The craftsman would have to produce a “masterpiece” that would be judged by the master cabinet maker and upon his approval would be admitted to the guild.

The 18th century in England became the epicenter of furniture design. The gentry of England were affluent and wanted the latest styles and best quality in furniture design to furnish their new estates and to display their wealth. The most important cabinetmaker in that period was Thomas Chippendale (1718–1779).  His furniture is well-known because he wrote and published a design book in 1754 called The Gentleman and Cabinet Maker’s Director, which became his legacy. He was the first cabinet maker to publish a book of design and it completely established his reputation and fame. His pieces are not signed but the quality of his work is superior.

Two other cabinet makers who published design books included Thomas Sheraton (1751 – 1806) The Cabinet-Maker and Upholsterer’s Drawing Book and George Hepplewhite (1727–1786) The Cabinet-Maker and Upholsterer’s Guide. These three cabinet makers were well versed in classical architecture as it was part of their education and they used this knowledge for their designs. You will find that most antique English furniture styles you will buy today follow designs created by these three men.

Susan Silver Antiques carries both formal and country types of case pieces.  Give me a ring if you would like more information: (413) 229-8169