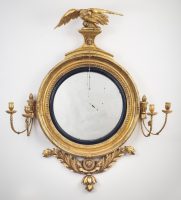 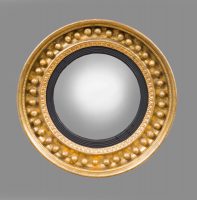 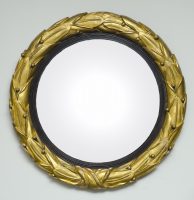 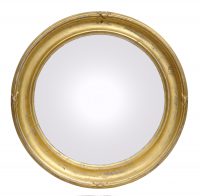 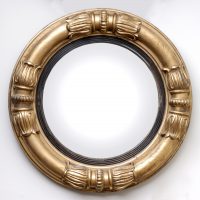 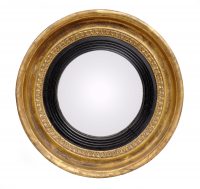 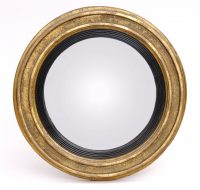 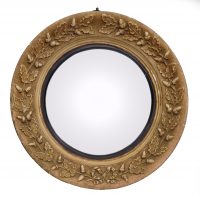 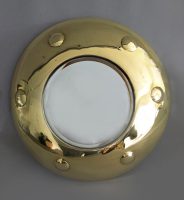 Antique convex mirrors are extremely decorative and give a spectacularly dazzling effect. They have been around for centuries. The round convex mirror gives a distorted effect and was very fashionable over a twenty or thirty year span, especially in the Regency period (1811-1820). It’s had an amazing resurgence and is extremely popular in todays’ decorating schemes. I just think they never went out of fashion. Supposedly, the convex mirror was made for the dining room so that the butler could keep tabs on the diners and see to their needs without moving around the room and disturbing them. Another apocryphal story is that they were used in the ball room so participants could see who was dancing with whom without seeming obvious.

The process of making convex mirrors was developed in the Medieval and Renaissance periods when the glass blower would blow a small sphere, coat the inside of the bubble with lead or tin; hence making it reflective. It would then be cut when still molten into smaller pieces.

Additionally, they were made in Germany in the 15th century and in France in the 18th century. The mirrors became immensely popular in England. Eventually, in the late 18th century, they started being made at the Ravenhead works of The British Cast Plate Glass Manufacturers.

Most antique convex mirrors have elaborate carved and gilded frames. Open winged eagles mounted on a rocky ledge are a popular motif on the crest and are highly sought after.  The eagle usually has a fine chain hanging from its beak with gilt balls attached at the ends. Thomas Sheraton, the 18th century cabinetmaker, was so enamored of convex mirrors that he had multiple designs for them in his Cabinet Dictionary of 1803 and that was the only mirror type he featured. Also, the prominent firm of Ince and Mayhew, a partnership of cabinetmakers and designers, published designs for convex mirrors in their design book The Universal System of Household Furniture (1759–63).

Some of the carved and gilded features found on the mirror were candle arms or girondoles attached to the sides of the frame, carved cornucopias, pairs of sea-horses, or hippocampus, coiled snakes or boldly carved acanthus leaves flanking the central crest. Another fabulous feature was a pair of opposing or intertwined carved dolphins. Lastly, the outer molded border is usually surrounded by gilded, applied ball ornaments.