Side Chairs View All Seating 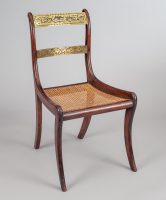 Rosewood Child's Side Chair
England
Circa 1850 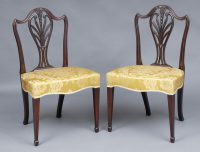 Georgian Chinese Chippendale Side Chair, Circa 1760
English
Circa 1760

Technically, a side chair is a chair without arms. The antique English side chair can be very formal. The Chippendale, Sheraton or Hepplewhite  dining chair is an example and will have a high crested back, a carved splat, a slip-in upholstered seat, cabriole, splayed or straight chamfered legs, with or without a stretcher and made from a host of various woods such as walnut, mahogany, rosewood and satinwood. It can also be used throughout the house where ever an extra chair is needed.

An unusual style of the 1790s was the “Trafalgar” chair. It was made to commemorate Nelson’s victory at the Battle of Trafalgar in 1805. It had caned seats, a rope twist top rail or brass inlaid top rail, raised channeled seat rails and sabre legs. A flat boxed cushion or squab, would fit between the rails.

The 19th century saw a proliferation of styles such as the Gothic Revival inspired chair with ornamental arches and trefoil splats. Augustus Welby Northmore Pugin (1812-1852), architect and designer, pioneered the Gothic Revival style. He designed the interior of the Palace of Westminster in London and its clock tower, known as Big Ben. Other historical styles are the Greek klismos chair, Neo-classical designs, Regency, Elizabethan styles with strapwork and spiral turnings, the Rococo Revival style continued in fashion from the 1830s to the 1860s. Later periods include Victorian (1830-1900), Arts and Crafts (1880-1910), Art Nouveau (1880-1910), Edwardian (1901-1910) and Art Deco (1920-1940)