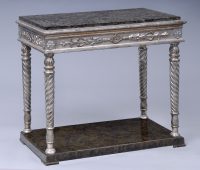 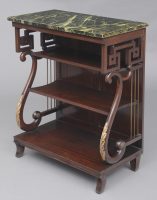 The console, demi-lune or pier tables are very elegant and make a grand impression when they are placed in your entry way or foyer.  They give an indication of what to expect from the rest of your décor. It really has no function except to look beautiful.

The origins are from France and Italy in the 17th century and were designed to go between two tall windows in palaces. The back of the table is straight so it can be affixed to the wall and stands on two legs. The front can be demi-lune in shape or serpentine, have a marble top and elaborate ornate decoration, such as gilded carvings of eagles and flora. Fabulously carved and gilded mirrors would be place above them.

The 18th century in England was a time of affluence and William Kent (c. 1685-1748), a brilliant architect, transformed furniture design and especially the console table for the gentry. The late 1700’s saw the introduction of the neoclassical style and consoles became lighter in feeling and were now designed with four legs, had demi-lune fronts, were made of mahogany and satinwood and inlaid with specimen woods and decorated with shell and fan inlay. Another architect designer of the period was Robert Adam (1728-1792) whose designs for these tables have become classic.