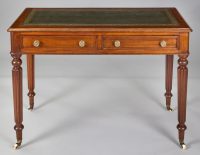 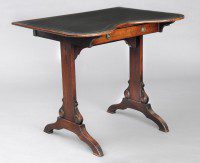 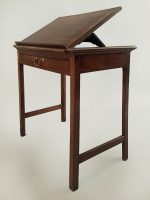 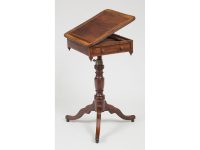 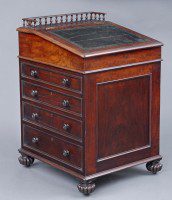 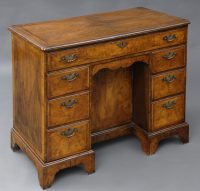 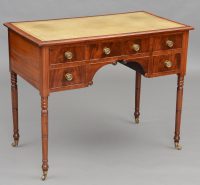 They are both functional and elegant at the same time. A formal library isn’t a library without a writing table or pedestal desk. The aristocrats of the 18th century wanted to assert their status of wealth and power with a grand table in their stately libraries.

Thomas Chippendale (1718-1779) had many designs for these tables in his third edition of The Gentleman and Cabinet-Maker’s Director (1762). Library tables have a flat top and may or not have a leather insert, two to three drawers in the frieze with brass hardware mounted on four turned, fluted, reeded or carved legs ending in casters. Partners writing tables have drawers on each side, front and back. They are much lighter in feeling than the heavier boxy pedestal desk which has four to five drawers or doors on each side of the knee hole opening. Some designs have standard end supports for legs. In the Regency period the stretcher between the end supports would be higher than in the later Victorian period to afford more room for the legs.

Gillows of Lancaster and London, a leading furniture maker of library tables in the late 18th and 19th centuries, was founded by Robert Gillow in 1730. They made much of the furniture attributed to Sheraton, Hepplewhite and other designers of the period. Their tables were of extremely high quality. Tables with the Gillows stamp on the drawer edge are highly sought after. Other types of desks are the Davenport, the Carleton House desk, knee hole desk, pedestal desk, bureau or slant front desk.