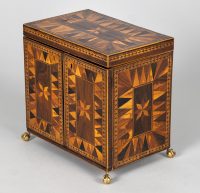 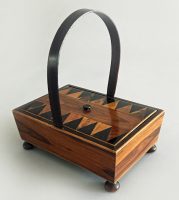 Antique Backgammon and Chess Board Book Box
England
Circa 1870 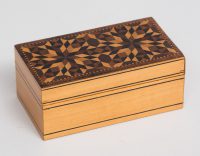 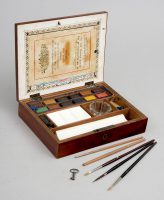 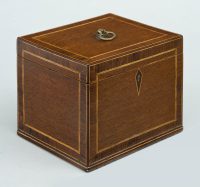 Antique English Mahogany and Rosewood Tea Caddy, Circa 1820
English
Circa 1820

Regency Penwork Box with Chinoiserie Decoration, Circa 1810
English
Circa 1810 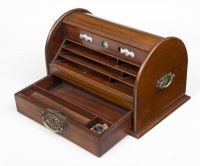 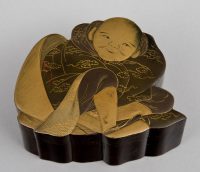 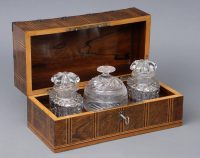 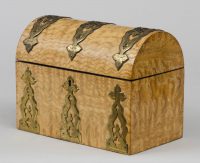 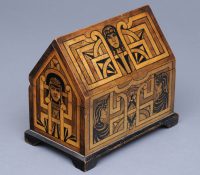 The name “box” supposedly came from the word “boxwood,” a finely grained hard wood that so many boxes were made of in the 18th and 19th centuries.

Materials include fruitwoods (such as pear and apple), walnut, mahogany, yew, sycamore, maple, ebony and lignum vitae, papier mâché, sterling silver, tortoiseshell, etc. As you can see, the list is endless.

Most wooden antique boxes are expertly crafted and were of extreme high quality.  The same expert cabinetmaking went into making the small box as in constructing a fine piece of furniture.

The antique writing box or writing slope is particularly interesting. The box dates back to the Middle Ages when monks would have used them. Great literature, letters and contracts would have been written on its writing surface. Later in the late 18th century the  became more sophisticated. When the box was opened, the hinged sloping rectangular lid enclosed a fitted interior with a writing surface of green baize (a woolen material resembling felt), or an inset leather. Additionally, it would contain a pen trough, a stamp box and inkwells. Most of them  contained a secret compartment with small drawers to hide its owners personal effects. Correspondence, bills or stamps would be kept inside.

It became an important component for the English on military expeditions around the world. These campaign writing boxes would have been brass-mounted to protect the corners and edges from being damaged during travel. The brass handles would have been recessed for the same reason. In the 19th century when young men went traveling throughout Europe on the Grand Tour, they would have used a writing box, but it might have also been fitted to contain toiletry items such as soap, shaving and lotion items.

Another interesting box is the antique tea caddy, used to store tea. The word caddy supposedly comes from “kati” which was the word for the Chinese pound, equal to about a pound and a third avoirdupois (a measurement system of weights which uses pounds and ounces as units).

When tea was introduced to Europe from China in the 17th century, it was extremely expensive and was kept properly stored and safe from theft under lock and key. It was so highly valued that the lady of the estate would take charge of the preparation of the tea herself.

Antique tea caddies still survive today in large numbers so it is relatively easy to start a collection. The most interesting ones are ones made from treen in a fruitwood and in the shapes of apples and pears. They are extremely well made out of mahogany, rosewood or satinwood and have delicate inlays and perhaps, have ivory knobs.

Susan Silver Antiques has a wide assortment of boxes.  She would love to answer any questions you might have. So call her: (413) 229-8169