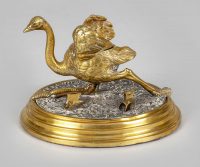 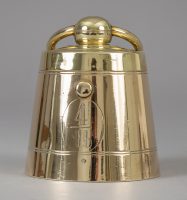 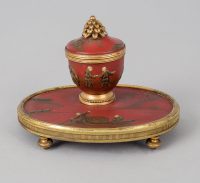 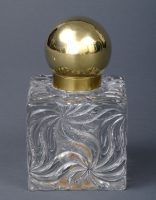 Antique Baccarat Inkwell, Circa 1900
French
Circa 1900 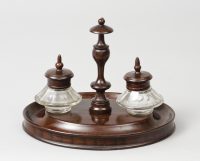 The child of today has no idea what an inkwell is. They are familiar with e-mail, but not inkwell or quill pen or probably not even ink itself, except in terms of ink jet or toner for the printer. Inkwells are so outmoded that there is no trace of one in their home or any office, library or important institution of learning.

Inkwells are containers that hold ink. They have been around since wealthy Egyptian families hired scribes to write letters, histories, records, etc. They used small stones with round depressions to mix powdered pigments and hold the ink. As time passed and writing became more widespread they used clay and stone containers with wax stoppers to store the ink. At this time inkwells were purely functional with no ornamentation or decoration. It wasn’t until the Renaissance that gold and silver and other precious metals were used to make inkwells. The Baroque period also saw excessive ornament used to make them.

In 18th and 19th century England, inkwells became very sophisticated. There were inkstands, also called a standish, which held two or more inkwells and other paraphernalia would be added.  Such as a sander, or sand shaker, which was used to help the ink dry and not smudge, a candle holder, a stamp box, a compartment for extra nibs, a seal or a bell to call an assistant.  There also might have been holes to hold the quill pen upright. Later on elaborate pen stands or holders for nib pens become popular. Victorian England also saw extravagant use of ornamentation. Colored inks, perfumes in painted porcelain inkwells and even figurines with flowing hair would decorate the inkwell in grand homes. Travelers would use portable inkwells to carry ink safely and special travel cases were made for them, usually of leather. The inkwell would have been made of glass with a brass hinged top and a seal to keep the ink from leaking.

The invention of the typewriter spelled the beginning of the end for the inkwell and hand writing in general. Inkwells and inkstands have become very popular collector’s items because of their high quality craftsmanship, great design and decorative nature. There is even a society of inkwell collectors, formed in 1981 which publishes a quarterly newsletter called The Stained Finger.