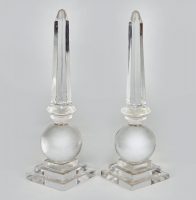 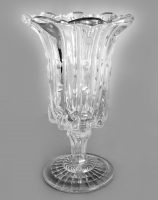 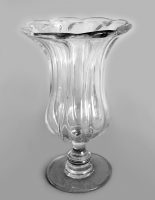 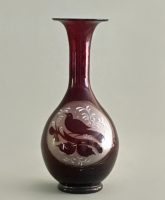 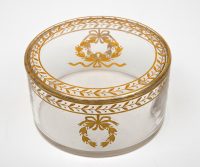 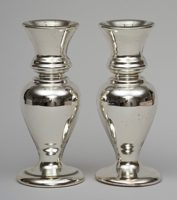 Pair of Victorian Mercury Glass Vases, Circa 1870
English
Circa 1870 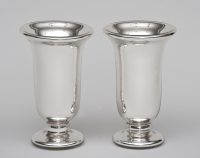 Pair of Mercury Glass Vases By Varnish
English
Circa 1870 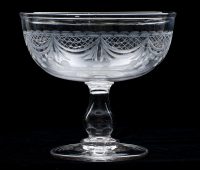 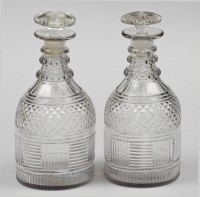 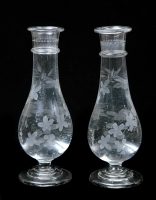 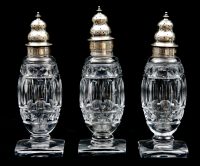 Set of American Sugar Sifters, Circa 1800
American
Circa 1800

Glass appeals to everyone. There is something for all tastes, budgets and age groups. Since ancient times, glass has been extolled for its delicate nature and beauty.  There is such a huge diversity of antique glassware available that collectors have abundant choices as to which areas to collect.

Glassmaking was discovered approximately 6000 years ago. Archaeological excavations have uncovered glass on the Syro-Judean coast, in Mesopotamia or Egypt, across the Roman Empire, Anglo-Saxon cemetery sites, India and China. Obsidian, a natural shiny black glass formed from volcanic eruptions, was used by Stone Age peoples for cutting tools, such as spearheads.

According to the Getty’s Art and Architecture Thesaurus, glass is: an amorphous, inorganic substance made by fusing silica (silicon dioxide) with a basic oxide; generally transparent but often translucent or opaque. Its characteristic properties are its hardness and rigidity at ordinary temperatures, its capacity for plastic working at elevated temperatures, and its resistance to weathering and to most chemicals except hydrofluoric acid. Used for both utilitarian and decorative purposes, it can be formed into various shapes, colored or decorated.*

Free blowing was invented by Syrian craftsmen in the 1st century B.C. They developed the blow pipe. This was a major breakthrough since it made glass production easier, faster and more economical than pottery vessels. Molten glass is affixed onto the end of the blowing iron, the glass blower rotates the mass to keep it centered and then inflates it by blowing through the iron to create a bubble.  The bubble is then cut off and a pontil iron is attached to the other end. The opening is created by reheating the bubble. The pontil mark is created when the glass object is cracked off the pontil iron. No two pieces are ever alike when hand blown. Glass blowing is a highly skilled craft and requires great agility.

Mold blowing is another technique and was invented by the Romans in the 1st century A.D. It requires less skill than free blowing and many versions can be made of the same form. A bubble of molten glass is blown into a form of wood or metal to create a desired shape.  Once shaped by the mold, the piece is removed and finished. Wares made this way were bottles, beakers, drinking cups and flasks.

Mold pressing was invented in 1827 in the United States. This was an inexpensive way to mass produce glass objects. The molten glass is poured into a metal form, a plunger is pressed down into the glass to form a smooth hollow interior and a mold patterned exterior. When the glass cooled, the mold was opened and any excess glass was removed by hand. Pressed glass is collected mainly in the U.S., but Europeans are catching on. The manufacturer most known in the U.S. was Boston & Sandwich Glass Co.(1826-1888) founded by Deming Jarves (1790-1869) in Sandwich, Massachusetts. In England it was manufactured by the John Sowerby’s Ellison Glassworks (1847-1972) and George Davidson & Co (est.1867).

Venice had become the glass manufacturing center of the world by the 14th century. Murano glass was superior because the local quartz pebbles were almost pure silica and were ground into a fine clear sand that was combined with soda ash from the Levant. The Venetians had a monopoly on this combination. This gave them a trade advantage over the rest of glass producing world.

George Ravenscroft (1632 –1683), an English businessman of means in the import and glass making trades, invented clear lead crystal, or flint glass, in 1674. This was a major advance in glass making and revolutionized the industry. He added lead oxide to the molten glass using sea-coal as a furnace fuel. Because this technique increased the “working period” of glass, making it easier to manipulate, England overtook Venice as the center of the glass industry in the 18th and 19th centuries.

There are so many areas of collecting antique glass:

Colored glass, which is made by adding metallic oxides to the glass

Enameled glass, known from Roman times and appeared in Venice in the 15th century

Engraved glass, which is the technique of finely cutting a decorative pattern onto the glass surface

Cut glass, which had to be done on thicker walled lead glass that could accommodate deep and elaborate cutting

Cameo glass, dating to the Romans in the 1st century A.D., which was the technique of layering the body of glass with contrasting colors and cutting back to leave the decoration standing proud and the background in the base color.

Susan has several pieces of glass decanters, vases, cut and etched bowls, colored glass and cameo glass. Call her, she’d love to talk to you about glass: (413) 229-8169.